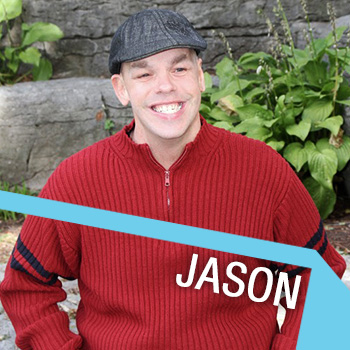 Can’t you just hear it? This young man walks into Champs, a local sports diner, and the whole place erupts at once – “Jason!!!” Just like on the 80’s sitcom, Cheers, everyone knows Jason’s name. One might call this young man “Mr. Social,” because of his kind and outgoing personality, and his natural ability to endear himself to everyone present.

If he’s not at Champs, Jason might well be at Sticks, another local establishment. And, if he’s not there watching a game, this very social guy might be found enjoying a Lakers game, a game of basketball, bowling with the guys, or swimming. It doesn’t really matter what he’s doing – Jason just loves to be with friends.

When he’s not “hangin’ with the guys” and enjoying one activity or another, one of Jason’s favourite things to do is to attend live music concerts. With such an eclectic interest in music, Jason was thrilled to have met Johnny Read and Tom Cochrane, but would be just as happy checking out Guns and Roses, or Arrowsmith.

Although he is very outgoing, Jason does also love his quiet time – he would just as soon be found enjoying his choice of music, at home within the walls of his own music listening studio with his dog Tara, as he would be found heading off to Lakeview Bowl to enjoy a game of bowling with his friends, or heading off to a live concert. Quiet time is easy when you have such a diverse – and growing – library of CDs.

Since Jason is a virtual people magnet, his future is bound to include lots of activity – both quiet and energy-filled – with friends, new and old. With such an interest in people and in the activities that connect them, when he isn’t enjoying his down time, he’s bound to be going somewhere … where everyone knows his name.